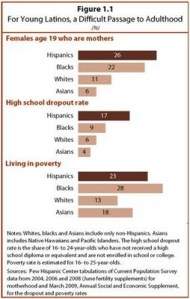 This is part of a Pew Research Center series of reports exploring the behaviors, values and opinions of the teens and twenty-somethings that make up the Millennial Generation

Hispanics are the largest and youngest minority group in the United States. One- in-five schoolchildren is Hispanic. One-in-four newborns is Hispanic. Never before in this country’s history has a minority ethnic group made up so large a share of the youngest Americans. By force of numbers alone, the kinds of adults these young Latinos become will help shape the kind of society America becomes in the 21st century.

This report takes an in-depth look at Hispanics who are ages 16 to 25, a phase of life when young people make choices that — for better and worse — set their path to adulthood. For this particular ethnic group, it is also a time when they navigate the intricate, often porous borders between the two cultures they inhabit — American and Latin American.

The report explores the attitudes, values, social behaviors, family characteristics, economic well-being, educational attainment and labor force outcomes of these young Latinos. It is based on a new Pew Hispanic Center telephone survey of a nationally representative sample of 2,012 Latinos, supplemented by the Pew Hispanic Center’s analysis of government demographic, economic, education and health data sets.

The data paint a mixed picture. Young Latinos are satisfied with their lives, optimistic about their futures and place a high value on education, hard work and career success. Yet they are much more likely than other American youths to drop out of school and to become teenage parents. They are more likely than white and Asian youths to live in poverty. And they have high levels of exposure to gangs.

These are attitudes and behaviors that, through history, have often been associated with the immigrant experience. But most Latino youths are not immigrants. Two-thirds were born in the United States, many of them descendants of the big, ongoing wave of Latin American immigrants who began coming to this country around 1965.

As might be expected, they do better than their foreign-born counterparts on many key economic, social and acculturation indicators analyzed in this report. They are much more proficient in English and are less likely to drop out of high school, live in poverty or become a teen parent.

But on a number of other measures, U.S.-born Latino youths do no better than the foreign born. And on some fronts, they do worse.

For example, native-born Latino youths are about twice as likely as the foreign born to have ties to a gang or to have gotten into a fight or carried a weapon in the past year. They are also more likely to be in prison.

Throughout this nation’s history, immigrant assimilation has always meant something more than the sum of the sorts of economic and social measures outlined above. It also has a psychological dimension. Over the course of several generations, the immigrant family typically loosens its sense of identity from the old country and binds it to the new.

It is too soon to tell if this process will play out for today’s Hispanic immigrants and their offspring in the same way it did for the European immigrants of the 19th and early 20th centuries. But whatever the ultimate trajectory, it is clear that many of today’s Latino youths, be they first or second generation, are straddling two worlds as they adapt to the new homeland.

According to the Pew Hispanic Center’s National Survey of Latinos, more than half (52%) of Latinos ages 16 to 25 identify themselves first by their family’s country of origin, be it Mexico, Cuba, the Dominican Republican, El Salvador or any of more than a dozen other Spanish-speaking countries. An additional 20% generally use the terms “Hispanic” or “Latino” first when describing themselves. Only about one-in-four (24%) generally use the term “American” first.

Among the U.S.-born children of immigrants, “American” is somewhat more commonly used as a primary term of self-identification. Even so, just 33% of these young second generation Latinos use American first, while 21% refer to themselves first by the terms Hispanic or Latino, and the plurality — 41% — refer to themselves first by the country their parents left in order to settle and raise their children in this country.

Only in the third and higher generations do a majority of Hispanic youths (50%) use “American” as their first term of self-description.

Measured in raw numbers, the modern Latin American-dominated immigration wave is by far the largest in U.S. history. Nearly 40 million immigrants have come to the United States since 1965. About half are from Latin America, a quarter from Asia and the remainder from Europe, Canada, the Middle East and Africa. By contrast, about 14 million immigrants came during the big Northern and Western European immigration wave of the 19th century and about 18 million came during the big Southern and Eastern European-dominated immigration wave of the early 20th century.2

However, the population of the United States was much smaller during those earlier waves. When measured against the size of the U.S. population during the period when the immigration occurred, the modern wave’s average annual rate of 4.6 new immigrants per 1,000 population falls well below the 7.7 annual rate that prevailed in the mid- to late 19th century and the 8.8 rate at the beginning of the 20th century.

All immigration waves produce backlashes of one kind or another, and the latest one is no exception. Illegal immigration, in particular, has become a highly-charged political issue in recent times. It is also a relatively new phenomenon; past immigration waves did not generate large numbers of illegal immigrants because the U.S. imposed fewer restrictions on immigration flow in the past than it does now.

The current wave may differ from earlier waves in other ways as well. More than a few immigration scholars have voiced skepticism that the children and grandchildren of today’s Hispanic immigrants will enjoy the same upward mobility experienced by the offspring of European immigrants in previous centuries.3

Their reasons vary, and not all are consistent with one another. Some scholars point to structural changes in modern economies that make it more difficult for unskilled laborers to climb into the middle class. Some say the illegal status of so many of today’s immigrants is a major obstacle to their upward mobility. Some say the close proximity of today’s sending countries and the relative ease of modern global communication reduce the felt need of immigrants and their families to acculturate to their new country. Some say the fatalism of Latin American cultures is a poor fit in a society built on Anglo-Saxon values. Some say that America’s growing tolerance for cultural diversity may encourage modern immigrants and their offspring to retain ethnic identities that were seen by yesterday’s immigrants as a handicap. (The melting pot is dead. Long live the salad bowl.) Alternatively, some say that Latinos’ brown skin makes assimilation difficult in a country where white remains the racial norm.

It will probably take at least another generation’s worth of new facts on the ground to know whether these theories have merit. But it is not too soon to take some snapshots and lay down some markers. This report does so by assembling a wide range of empirical evidence (some generated by our own new survey; some by our analysis of government data) and subjecting it to a series of comparisons: between Latinos and non-Latinos; between young Latinos and older Latinos; between foreign-born Latinos and native-born Latinos; and between first, second, and third and higher generations of Latinos.

The generational analyses presented here do not compare the outcomes of individual Latino immigrants with those of their own children or grandchildren. Instead, our generational analysis compares today’s young Latino immigrants with today’s children and grandchildren of yesterday’s immigrants. As such, the report can provide some insights into the intergenerational mobility of an immigrant group over time. But it cannot fully disentangle the many factors that may help explain the observed patterns-be they compositional effects (the different skills, education levels and other forms of human capital that different cohorts of immigrants bring) or period effects (the different economic conditions that confront immigrants in different time periods).

Readers should be especially careful when interpreting findings about the third and higher generation, for this is a very diverse group. We estimate that about 40% are the grandchildren of Latin American immigrants, while the remainder can trace their roots in this country much farther back in time.

For some in this mixed group, endemic poverty and its attendant social ills have been a part of their families, barrios and colonias for generations, even centuries. Meantime, others in the third and higher generation have been upwardly mobile in ways consistent with the generational trajectories of European immigrant groups. Because the data we use in this report do not allow us to separate out the different demographic sub-groups within the third and higher generation, the overall numbers we present are averages that often mask large variances within this generation.

Advertisement
Between Two Worlds: How Young Latinos Come of Age in America