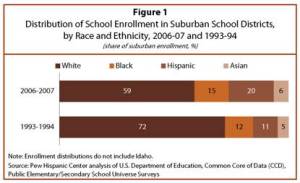 From Richard Fry, Senior Research Associate, Pew Hispanic Center
March 31, 2009
“The student population of America’s suburban public schools has shot up by 3.4 million in the past decade and a half, and virtually all of this increase (99%) has been due to the enrollment of new Latino, black and Asian students, according to a Pew Hispanic Center analysis of public school data. Once a largely white enclave, suburban school districts in 2006-07 educated a student population that was 41.4% non-white, up from 28% in 1993-94 and not much different from the 43.7% non-white share of the nation’s overall public school student population. At the same time, suburban school districts have been gaining “market share”; they educated 38% of the nation’s public school students in 2006-07, up from 35% in 1993-94.”

See Glenn Greenwald’s Salon piece, “The virtues of public anger and the need for more”
“The financial crisis has merely unmasked the corruption and rot in our establishment institutions that are staggering in magnitude and reach. Just as the Iraq War was not the by-product of wrongdoing by a few stray bad political and media actors but instead was reflective of our broken institutions generally, the financial crisis is a fundamental indictment on the way the country functions and of its ruling class. What would be unhealthy is if there weren’t substantial amounts of public rage in the face of these revelations.”