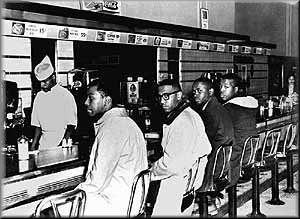 On February 1st, 1960, in Greensboro NC, four students from North Carolina A&T sat down at a “whites-only” Woolworth’s lunch counter and ask to be served. This action by David Richmond, Franklin McCain, Ezell Blair, and Joseph McNeil ignited a wave of student sit-ins and protests that flashed like fire across the South. A fire for justice that no amount of beatings, jails, or firehoses, could extinguish. Until Rand Paul… Rand says, in effect, that the state can’t legislate against private businesses that discriminate. Is his wig on too tight?

Maddow: “How about desegregating lunch counters?” […]

Rand Paul on Rachel Maddow: Private Businesses Can Discriminate on Basis of Race